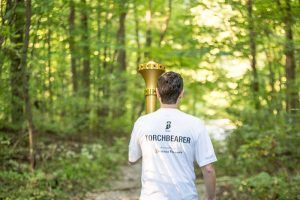 20 Torchbearers will be carrying the Bicentennial flame for Montgomery County on October 13th, 2016.  This is a diverse group with a broad range of accomplishments.

Suzi Gephart – Suzi is a lifelong resident of Montgomery County and has been an educator for 25 years.  As a teacher and now principal, she has led many volunteer activities and demonstrated exceptional public service in this community.  Suzi is actively involved in The Vine Christian Church, Celebrate Recovery Jail Ministry, “Sugar Creek” Cluster of United Methodist Churches, as well as actively participating in several fundraising activities that benefit area non-profits. 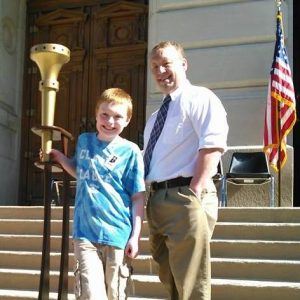 Jonathan with his dad, Eric

Jonathan Schronce – Jonathan is an 8-year-old with autism.  He was diagnosed in 2012 and has become a powerful advocate for people with autism.  He has been a spokesperson for Walk Now for Autism Speaks events.   His team has raised thousands of dollars for autism research.  Jonathan is a strong runner.  Running helps him remain calm by stimulating his large muscle groups.  He competes in several local 5k running events.

Dale Petrie – Dale has shown his dedication to the community through his involvement with Crawfordsville schools, Crawfordsville Park & Recreation, Lew Wallace Study & Museum, Taste of Montgomery  County, Strawberry Festival, Sugar Creek Swim Club, First Christian Church and Wabash College.  Dale is retired from Sommer Metalcraft, and is currently employed by the City of Crawfordsville in the Mayor’s office.

Melissa Patton – Melissa is a survivor of domestic abuse.  While working full-time in the Human Services industry and taking college courses, she raised three daughters as a single mother.  After eight years of hard work, Melissa graduated from Saint Mary-of-the-Woods College.  Melissa now works with at-risk kids and gives her heart and soul to leave a positive imprint on their lives.  She also serves on the Waveland Town Board and the Board of Halfway Home. 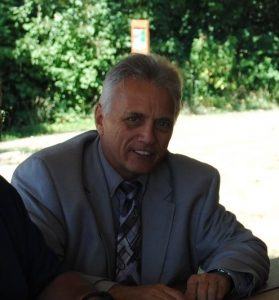 Dave Long – The League of Women Voters awarded Dave with the 2013 “Making Democracy Work Award” in recognition of his life-time service to his country and community.  He served for 37 years in the National Guard.  In 2005, he became the Executive Vice President of the Chamber of Commerce.  Dave has been active for 38 years in Kiwanis.  he also serves on the Montgomery County Visitors and Convention Bureau Board and the LWV Voter Service Chair.

Bill Rossok – Bill received the Purple Heart for his service to the United States of America while serving int he Vietnam War.  He is very proud of his service to his country.  After returning to Montgomery County, Bill worked more than 37 years at RR Donnelley.

Jack Reimondo – Jack isn’t your typical teenager.  He is passionate about volunteering and giving back to his community.  Jack was selected as the 2015 American Diabetes Association’s Indiana Youth Ambassador.  In that role, he speaks to the community about the impact diabetes has had on his life as a type 1 diabetic and his passion and commitment to stop diabetes.  Jack is also extremely involved in his church and school.

Christine Amidon – Christine has spent her entire adult life improving the lives of the young and old in Montgomery County.  She served on the board of the Christian Nursing Service for more than 20 years and volunteering at the free Well Baby Clinic and Adult Health Clinic.  Christine helped create the Montgomery County Free Clinic and is on the board.  She is the coordinator of healthcare for Crawfordsville Schools.  She was name the 2009 Indiana School Nurse of the Year. 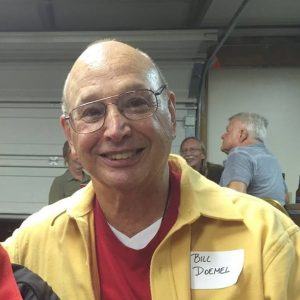 Bill Doemel – Bill sees an opportunity and finds a solution.  Bill is a Professor Emeritus of Biology at Wabash College.  After serving on the board of the Christian Nursing Service, he began to explore options for a better health clinic.  In 2009, he founded and led Montgomery County Free Clinic and began to explore options for a location, funding, and malpractice coverage.  In 2013, the Mary Ludwig Free Clinic opened.  Bill is a true community leader that sees an opportunity, embraces it and develops a solution.

Todd Barton – Todd is a lifelong resident of Montgomery County, and is currently serving his second term as Mayor of Crawfordsville.  Under his leadership, Crawfordsville has been designated as a Stellar Community.  Todd also served the community as a firefighter and paramedic, and was Fire Chief of the Crawfordsville Fire Department.

Phil Bane – Phil is a lifelong resident of Montgomery County.  He is currently in his third term as a Montgomery County Commissioner.  In his first day in office, he began discussions of the importance of getting county finances in order thereby making government run more efficiently and at a lower cost.  Phil owns Bane-Welker Equipment Sales.

David Hadley – David has been a resident and community leader in Montgomery County for the last 47 years.  He was an assistant professor of political science at Wabash College.  David served two terms of the South Montgomery School Board.  In 2015, he was inducted into the Southmont Dollars for Scholars Hall of Fame.  David currently serves on the Crawfordsville Plan Commission, Sugar Creek Advisor Board and the Friends of Sugar Creek.  He is also leader of the Montgomery County  Democratic Party.

Pat McDowell – Pat was the first head football coach at North Montgomery High School from 1972 – 1979.  He was an Indiana school teacher for 38 years.  Pat has been a longtime volunteer for the Montgomery County Special Olympics, K of C Tootsie Roll Drive coordinator, and Bernie’s Buffet.  Pat is probably most known as Santa around Montgomery County where he has played the jolly soul for over 30 years.

William Placher (posthumous) – William was influential theologian, teacher, and mentor to generations of Wabash College students and Hoosier pastors.  William taught philosophy and religion courses for 34 years at Wabash College, where he was one of the most popular teachers.  In 2002, the American Academy of Religion named him the best teacher in the country.  In 2006, the Indiana Humanities Council honored him with the Indiana Humanities Award for his teaching, scholarship and collegiality. 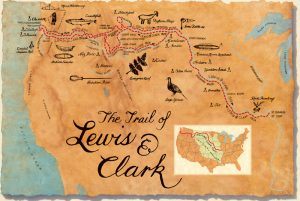 William Bratton (posthumous) – Twenty-five year old William Bratton, red-headed and nearly six feet tall, was known by his friends as reserved, economical, intelligent and of strict morals.  These traits caught the attention of William Clark and Meriweather Lewis as they recruited strong young men to fulfill a dream of President Thomas Jefferson to find a water route to the Pacific.  He journaled daily the expedition, as he could read and write.  William raised 10 children near Waynetown with his wife Mary.

Jane Christopherson – Jane is a long-time resident of Montgomery County.  She has spent most of her professional career working to nurture children so they might reach their full potential as human beings.  For 30 years of employment at the Montgomery County Youth Services Bureau she has taught and directed the Alternative School, and supervises the CASA Program.  Jane is on the steering committee for the Women’s Legacy Organization.

Lew Wallace (posthumous) – Lew Wallace was a true Renaissance man.  He served in the 1840’s Mexican War, was the youngest Major General in the Union Army during the Civil War, fighting with valor at Shiloh and saving Washington, D.C., at the Battle of Monocacy.  He served as a judge on the trails of the Lincoln Conspirators, and served as governor of the New Mexico territory during the Lincoln County Wars and dealt with Billy the Kid.  Lew pursued creative endeavors through his life and authored six books, including Ben Hur:  A Tale of the Christ.

Bryce Barton – Bryce is the Athletic Director at Crawfordsville High School and is an inspiration to both students and faculty.  He gives of himself tirelessly for student athletes.  Bryce takes a personal interest in each and every student that is or has been a part of his high school.  Bryce wears many hats.  From that of coach, to college recruiter, to counselor to tutor, he has been there for anyone who needs him.  Bryce is an accomplished athlete and has competed in countless marathons, including Chicago, New York and Boston. 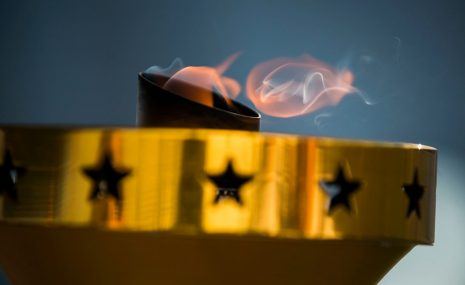